The pilot of a commercial airplane, or any other aircraft for that matter, is held in high regard by most people. The job of ‘pilot’ is the most highly regarded you can really have in the aviation industry. Not surprising since pilots have to work under very strict employment requirements, need a great deal of rigorous training, need excellent vision and hearing, and continuously learning new rules and regulations. This isn’t the kind of job one can just walk into out of college or graduate school! 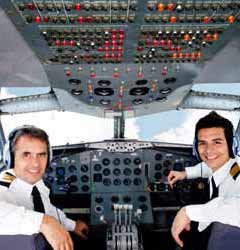 Pilots must understand navigation, types of weather and weather patterns, cockpit instrumentation, and they need FAA certification. The certification level is determined largely by the kind of plane to be flown, but it’s usually airline transport certification with specific training for a type of aircraft — like a 737. Additional certifications may be needed.

The FAA and airlines also requires that their pilots obtain a minimum number of flight hours.

Where do all the pilots come from? Generally, most pilots you’ll meet flew for commuter airlines or were in the military.

Given all of the challenges, training, and pilot job requirements it’s not surprising that they earn a decent living. They’re entitled. Like airline flight attendants, pilots sometimes have the flexibility to arrange their work schedules to allow more time off. There are plenty of challenges but in general, pilots have far more freedom than their co-workers in the airline industry.

You probably know that not every pilot is flying a 737 or MD-80 for a commercial airline. There are all kinds of pilot career opportunities and we discuss many of them on Airline Job Finder. 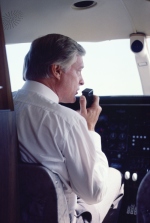 On Airline Job Finder we break down a number of different kinds of pilot jobs and careers. Each of the following types of pilot jobs is discussed in great detail in our Free Members Section.

Though the pilot is the ultimate authority on an aircraft, the copilot, otherwise known as the first officer, is trained and qualified to fly the plane in the event of an emergency or to provide the pilot a break. The copilot assists the pilot during flight, including handling the radio communications, navigation, and working with the pilot to complete the many checklists involved with flying an aircraft.

For aircraft still requiring a flight engineer, who may or may not be a licensed commercial pilot building up flight time, the duties include monitoring the aircraft’s fuel system, engines, air conditioning and cabin pressurization levels. One of the primary tasks of the flight engineer, particularly on long distance flights, is to monitor the fuel consumption rate and that entails computing head or tail winds, engine RPM, and other factors.

Air freight or cargo pilots fly aircraft for companies like UPS and FedEx. The planes they fly are loaded with any number of items. This includes shipments of packages, mail, food, machinery, and anything else that needs to be transported via air. All of the major carriers including FedEx, UPS, and the US Postal Service contract airlines, or have their own aircraft fleet, to make pickups and deliveries of cargo and freight.

Corporate pilots fly company executives and others to and from their place of business to meet with clients, attend trade shows, or visit regional offices. Many corporations buy their own aircraft and hire their own pilots for the advantage of having air transportation available to them at a moment’s notice.

Ever heard of a ‘crop duster’? Agricultural pilots, or aerial applicators, are commercial pilots trained and certified for operating a specialized fixed-wing or rotary aircraft for agricultural purposes, commonly referred to as crop dusting.

Helicopter pilots are mostly needed for transporting people or equipment short distances. Some helicopter pilots work for mining corporations taking supplies and personnel into and out of the bush. They may be hired by government agencies to track and document wildlife, or they may work as air traffic reporters. The site supervisor oversees the entire construction project on behalf of the contracting company hired by the refinery.

For each type of job there’s a description, pay details, and educational requirements.

You won’t want to miss our interview with a veteran pilot either. He discusses how he worked his way up from being a bush pilot in Canada to first officer of a 737.