According to statistics from the Bureau of Labor Statistics within the U.S. Department of Labor, two-thirds of the 515,000 employees in air transportation work in ground occupations. Without ground support, planes could not fly, customer service would be non-existent, and airlines could never maintain flight schedules. This translates to a significant number of jobs in the airline industry that do not involve actually flying the airplane. It requires personnel in almost every area of the country, even in places without airports. 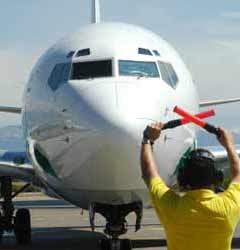 In Focus: Behind the Scenes at Heathrow Airport

The US Department of Transportation reported in 2014 that 20 major airlines are currently operating in the United States and another 9 airlines operating out of Canada. The largest half-dozen are known as “The Big Six” and have a base of operations located at one or more airports around the country. Some fly internationally as well.

Each of these companies, and many smaller ones besides, need ground support crew to keep them running. Not only do the airlines and charter companies provide jobs, but so do airports and all the concessionaires located in the airports. Ground support jobs aren’t found in just the commercial sector, either. The U.S. and Canadian governments also use aircraft in various roles and ground support is needed to keep those planes in the air as well.

This section of AirlineJobFinder provides you with an overview of the aviation industry. We guide you through the various sectors, literally from the ground up. If you’re interested in a particular job but aren’t sure where to apply for that position, this is an excellent place to find out. We have all the latest information about which section of the industry is hiring for what positions. In addition to that, we give you inside tips on what to expect for each job and what employers will expect you to know before you apply. Don’t miss our interview with Jack, a seasoned aviation mechanic who has spent a lifetime beneath aircraft engines with a wrench in his hand. He’ll give you the real scoop on what life is like as an aviation mechanic.