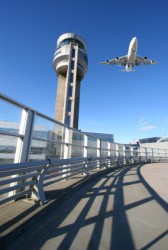 Who wants to go around the world in 80 days when you can do it in just a matter of hours? Thanks to airplanes, that’s quite possible. And soon, passengers will be flying to the moon or on jaunts into outer space. Don’t laugh – it’s true, as you’ll find within these pages at Airline Job Finder. Literally, the sky’s the limit when it comes to finding your dream job in the aviation industry. With the right skills, education, and knowledge about the jobs you’re interested in, you can have the career you always wanted. We can help – our aviation industry experts have detailed what you need to know, including job tips and interview secrets.

With the reduction in passengers, airlines that had not already been operating efficiently either went bankrupt or came very close to that. The companies that survived were those that tightened their belts and cut costs as much as possible. Low-fare carriers did comparatively well during this difficult time post-September 11, and for those who had to fly, both on business and for personal reasons, continued to purchase tickets. The airline industry became more efficient as a whole, because it was forced to do so, and the long-term affects of this are quite positive – higher profits due to lower costs. Labor remains its highest cost, and for some airlines, it’s 40 percent of their overall budget. Labor unions that represent the various segments of aviation, including mechanics, pilots, flight attendants, and others, have recently been in fierce negotiations with airlines over employee benefits and salaries. This will likely continue for quite some time.

Over 75 commuter carriers, also known as regional carriers, are operating in the United States, providing short and medium-haul scheduled service to passengers. These are a mix of independently owned and subsidiaries of major airlines. According to the Bureau of Labor Statistics in the U.S. Department of Labor, regional airlines are the fastest growing segment of commercial aviation. Here is a good list of regional carriers listed by country.