Security Screeners enjoy an average salary of over $30,000 per year or more once ‘locality adjustments’ are factored in. That’s right, if you live in Los Angeles your pay will be higher than if you’re in Boise, Idaho. In addition to excellent entry-level pay Security Screeners also receive government benefits: health insurance, retirement plan, sick and vacation pay. 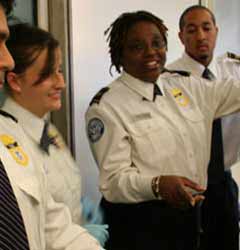 Have you ever worked in retail sales or in a customer service position? Those working in TSA Security Screener jobs combine their customer service experience with security responsibilities. There’s nothing worse for an airline passenger than going through the security checkpoint, right? Take off your shoes, remove your laptop and put it in the tray, clear out your pockets…and on and on. It’s not that pleasant.

Think of your own experiences at the airport. Can you think of a time when all or some of the Security Screeners exhibited some degree of humor and worked to put travelers at ease as best they can given the requirements? It’s not easy, but some are quite successful at it.

So what is the TSA and what do Security Screeners do?

The TSA was created after the 2001 trade enter attacks in New York. Airport security was brought under government control whereas previously it had been contracted out to private operations. 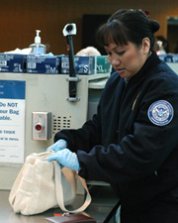 If you would like to pursue one of these screener jobs, the odds are good you’ll find an opening with more than 43,000 airport security screeners working in the U.S.

Screener jobs range from conducting screens of checked baggage to working at the airport security checkpoint where travelers walk through X-Ray machines and have their carry-on bags scanned and sometimes inspected for banned items.

As a TSA Security Screener it’s imperative to be flexible and open to change. The list of rules and regulations — and forbidden items — changes all the times. Over ten years ago, the government banned passengers from carrying liquids through the security checkpoint. No water. No gels. Etc. Then they amended the rule allowing for a limited amount of liquids to be carried in a ziplock baggy. The point is, you must be able to adapt to ever-changing rules! 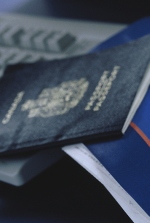 Transportation security officers rotate through various jobs at the security checkpoints. This helps reduce the monotony of the job.

At your airport you might find six to eight screeners rotating every 30 minutes through screener jobs that include running the conveyor belt X-ray machine, metal detectors, wanding passengers, or checking carry-on and toiletry bags.

If you stay with the TSA on a long-term basis there are ample opportunities for promotions. Perhaps you’ll advance to the job of lead transportation security officer where you’ll supervise screeners and manage rotations and scheduling. After more time on the job you could end up supervising an entire shift of screeners at the airport. With advance, of course, comes greater pay.